Why on EARTH would I want to build a dome home? Is it worth my effort to try?

You may be considering a dome for a number of reasons, but how do you sort the myth from the truth about domes? 50 years of building them has taught us a few things that might help you decide. The advantages in living in a dome far outweigh any struggle to build one! Any dome owner will tell you that.

A well-built dome is a safe, energy efficient and inexpensive home to buildand maintain.

Building an environmentally friendly geodesic dome is your next step. 50% energy savings on average vs regular homes. Leaving money that would have been paid to the utilities for the back end of a mortgage. Energy bills are unbelievable. $1805.00 on a total electric 4045 sq ft double dome for ONE YEAR! We keep it 67 degrees inside during the summer

Peace of mind in STORMS:

OUR residential domes are rated for 250 mph winds. You read that correctly.

One  of our domes survived the Weather channels 3rd worst tornado outbreak. April 2011 direct hit by an F5. More on the site...

Why do people who are affected by today's increasingly violent weather think a safe room is the answer? Why not have your life and your belongings intact in a NEW AGE dome?

YOU'RE ENTIRE HOME IS YOUR SAFE ROOM

Hurricanes?? Our domes shrug those off!   These domes after hurricane Alicia, a Texas F4, and Katrina which was inundated 12' and was the only structure in a forest of pilings! 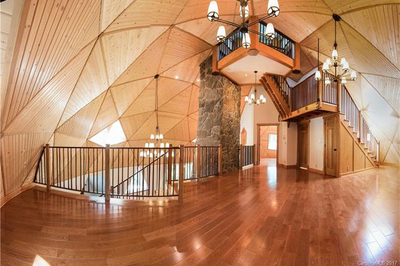 How can we help?

Whether we build it FOR you....

Or help you build it with your own people....

Simply the SAFEST home in any weather

Your community may qualify for a Low or NO COST public facility that also serves  as a FEMA rated tornado shelter.

Our domes have been certified by 2 math theories, a RISA computer model and a live structural crush test at the University of Alabama large structure testing labs, as well as the people who MAKE the building codes.  The study took 5 years to issue our ICC report.

NO other dome company has these credentials!   So, if you see another dome company that claims they are "as good or strong as ours", they are ...what's the best way to say...LIARS?    When we ask for your business be assured, we have been through the most exhaustive testing criteria in the industry. NO OTHER dome company has submitted, nor passed these testing procedures. Report content available to qualified entities.

USDA representatives recently inspected our new facilities and confirmed that New Age Domes qualify under current programs for grants for multi-use buildings such as fire stations, community centers etc. This multi-use capability offers more money than current FEMA grants for tornado shelters in these same communities. Many grant writers are familiar with current rules and is a whole new opportunity for your small town to have a multi-use building that's more than just a place to hide! Several are in grant process at this time!

Federal Grants are available for mobile home parks with more than 20 occupants in low to middle income areas as well as assistance on our personal sized shelters (also on this site) for those who are handicapped or unable to find public shelters in their community. 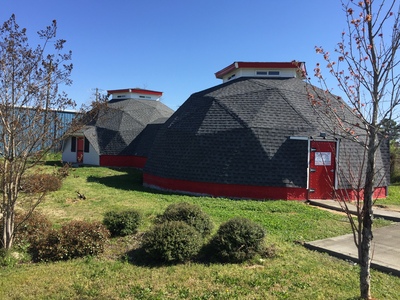 History is made in Tuscaloosa Alabama on July 21,2016 with the issuance of building permits to New Age Domes for the city's first FEMA 361 G tornado shelter. 2 long years later...We are complete! Our factory/shelter is built on the very ground cleared by the April 27th F-5 tornado that devastated Tuscaloosa, with more than 50 fatalities.

It will hold approximately 750 of my neighbors, several whom have keys, and have already used it for emergencies. We have also offered its use with a first responder on site to the Tuscaloosa EMA for the public's use. See more on the site and be sure to visit Facebook @ New Age Domes

But maybe... Getting Better!

So many domes were built incorrectly by owners in the 70's and 80's, bought from a magazine with no support, the dome industry has a huge smudge on its image. They are perceived as being leak prone or problematic. NOT TRUE!

Professionally built and supervised domes are another creature entirely!

Getting a loan for a dome can be a nightmare or not happen at all because of lenders pre-conceived notions about domes.   It's part of the herd mentality to first say no to a dome before actually doing their homework or looking at our credentials. Those bankers who have heard ALL the horror stories about owner built, no cupola domes, often have a difficult time lending on a geodesic dome for a variety of reasons. Lack of "comps" is  the most often quoted reason. Fannie Mae guidelines addresses this very specifically. You simply adjust the percentage of participation in the down payment. Freddie Mac actually gives domes a better position because of the energy efficiency. The other most often quoted reason for a NO, offered by appraisers is calculating the useful square footage in a dome. It's a simple formula. Call us if they can't figure it out!

We are approved for VA ,USDA, FHA, and HUD  long term financing

I get calls from dome owners who mention they are having trouble getting insurance on their domes. It is NOT an issue for a professionally built New Age dome. Getting quotes this month on my personal dome and Allstate, Alfa, and Hartford had zero issues with our product or domes we have upgraded. 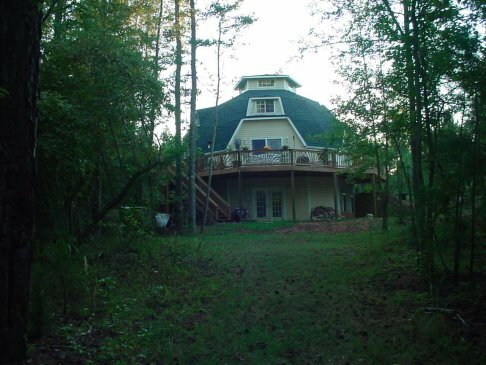 Lovely view from the dock on Lake Oconee

These folks had to add a second parking lot within 2 weeks of opening their doors.

A word from our founder

This website is all about plain speech. My blunt and often NOT politically correct words genuinely reflect the anguish and frustration I feel after PROVING the unprecedented strength of this product for decades, then again to the highest authority in the building world, and still see people continue to die in traditional homes, when this option is readily available. Mother nature doesn't care if she drops a tree on you in your bedroom in the middle of the night and kills you. Mother nature doesn't care if she destroys your home. Mother nature is having more temper tantrums these days.Why not defend your life and that of your  family in the strongest home you can build? As you go through our site you’ll see unedited reference letters from clients, lots of photos, and plenty of sights to make you wonder why people only build , (and rebuild after major storms) boxes... and that’s kind of the idea! Most people who tour our domes say the same things,"this just makes sense".

NEW AGE domes aren’t “hippy houses”, nor do they look like a 6th grade science project.

As seen on ABC 33/40https://www.facebook.com/abc3340,WVTM Birmingham, Tuscaloosa News, Wvua, CNN, Bob Van Dillon and Allison Chinchar of HLN, Jim Cantore of The Weather Channel has even weighed in,and a few we haven’t seen….

Please use the form below to contact us directly.

Or try us at [email protected]