This 15′ 9″ .....2″x4″ (half scale) model of our full sized dome product was subjected to a failure load at the University of Alabama’s large structure testing laboratory. 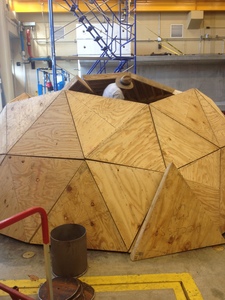 Inside placing bolts and getting ready 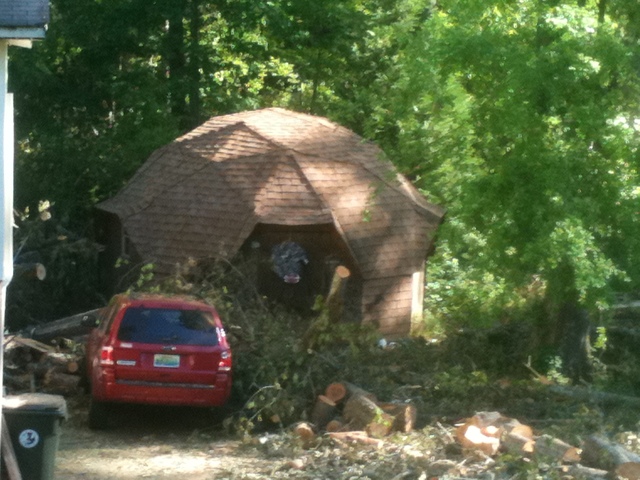 similar size and constructed dome after (4) 18" -24" trees were removed after a tornado. NO struts cracked. And it's 2x4" 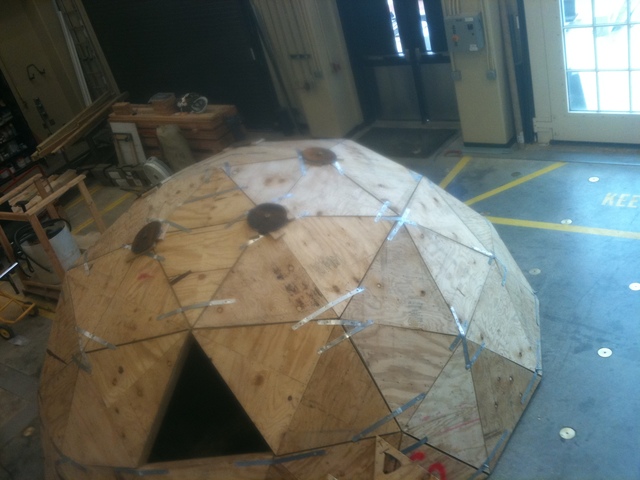 Interior attachment was thru a 1″ diameter grade 8 bolt and eyelet attachment on the points of the cupola in normal configuration. The round plates on top were 12" x 1/4" steel. Optimum Strap placement and size test also being performed. 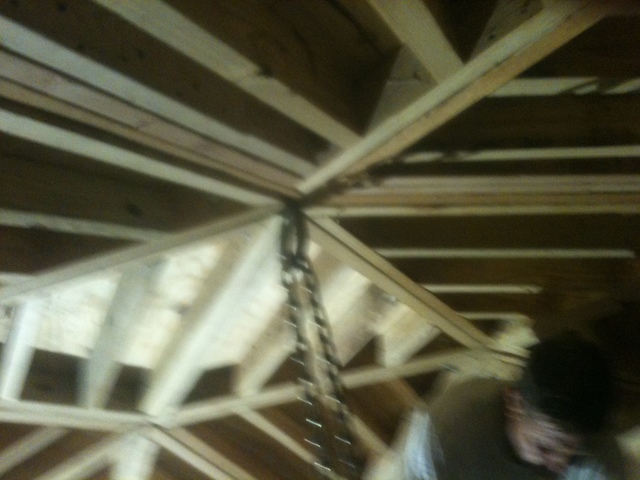 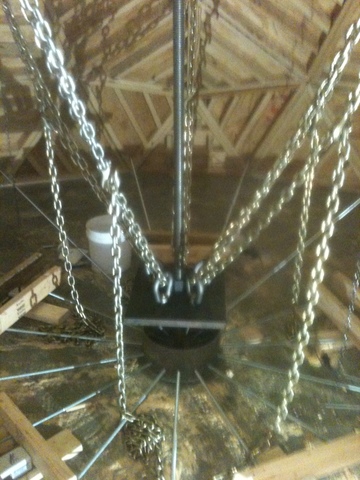 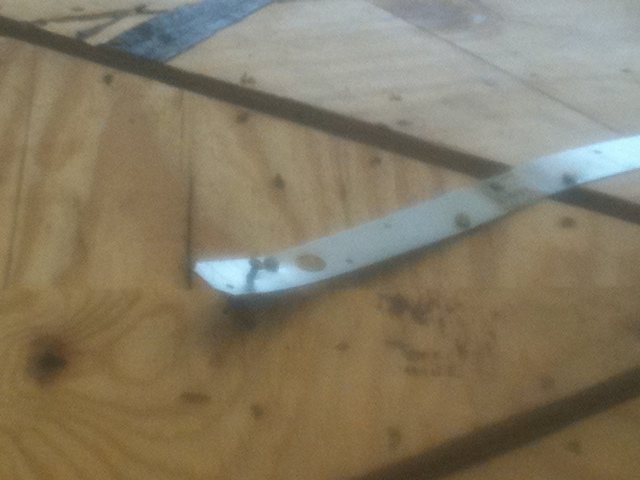 The DOME didn’t fail…the scaled down straps pulled the short, 1 1/2" Simpson nails in the smallest of the strap test configurations. Simply stated…that’s 6 to 10 TIMES stronger than standard framing, using 2x4's. Our regular production domes use 2x6 with 2x8 for shelter grade domes.

Our intent was to demonstrate the role the proper strapping played in increasing the strength of our domes. When the dome was pulled into failure mode it still held 85% of it's total strength because of redundant load paths, compared to a concrete domes'...ONE. When a concrete dome fails it's total as seen in Baton Rouge La when a fully cured monolithic sprayed concrete over foam, dome owned by Nucor Steel collapsed. Not a piece of rebar to be seen! Amazingly enough this is the very method being used by shelter architects these days and they've never been tested by the ICC. Only certified via somebody's liability policy and built because the other guys are doing it.

The UNFINISHED concrete bubble being built in Tuscaloosa already has cracks running top to bottom. Somebody is trying to cover them with epoxy paint.

After the test one side…. 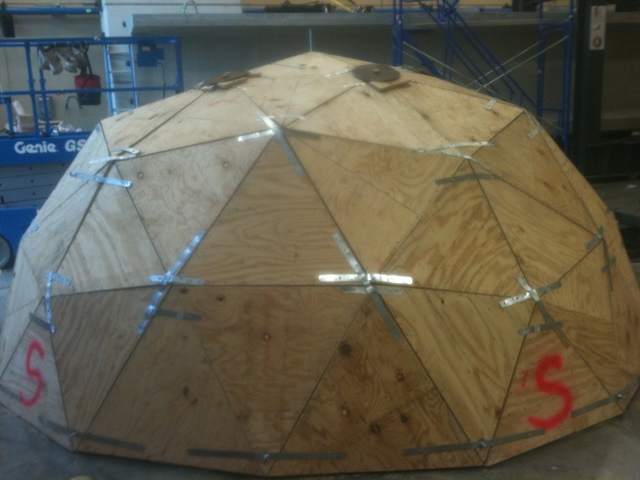 FAILURE point is in the upper left corner. You can see the strap pulled away for the engineer to photograph the  crack. This was the "failure moment" 44,000 lbs.

The dome still retained 85% of it's capacity at failure. Concrete domes retain 0 % at failure 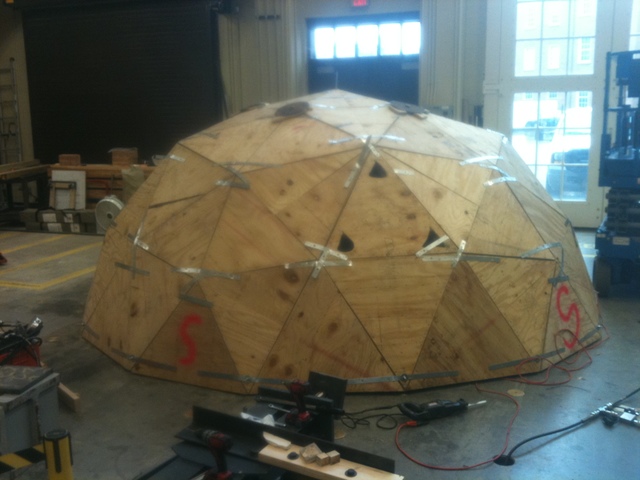 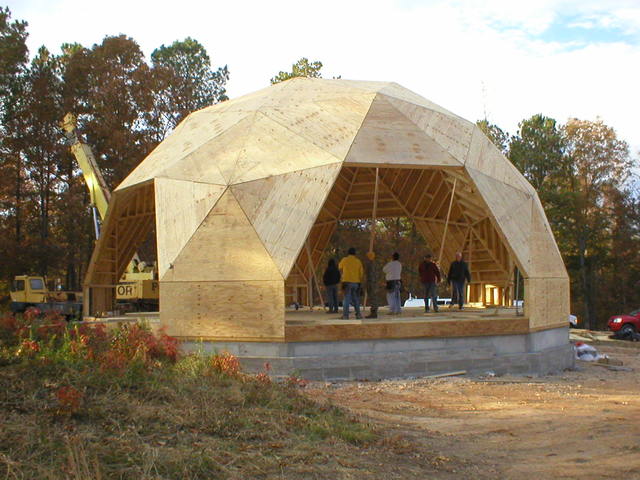 This particular model is rated for any cat 5 hurricane just as you see it. Another layer of plywood and extra strapping and it becomes a full fledged tornado shelter. Fully FEMA compliant for wood framed shelters after doors and windows! A few heavy duty storm shutters...

Here are a few of the  stages of our “World’s First FEMA 361G tornado shelter which doubles as our new manufacturing facility. 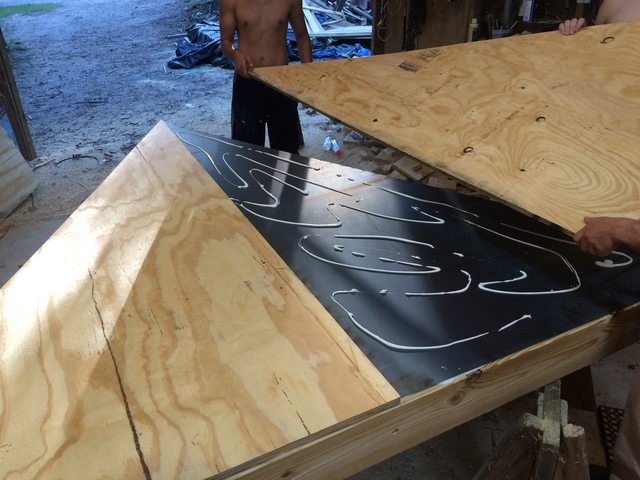 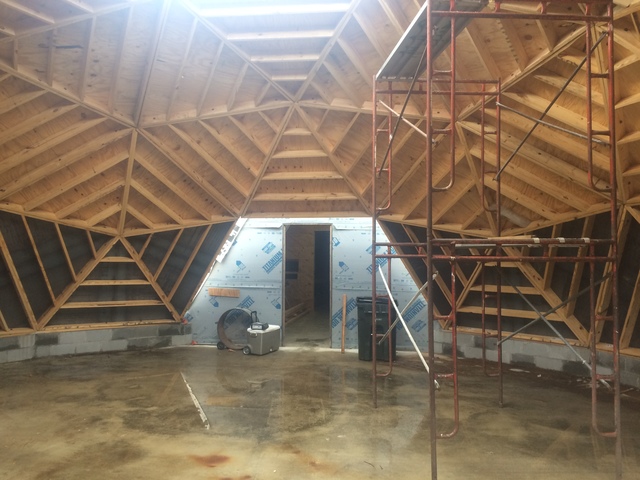 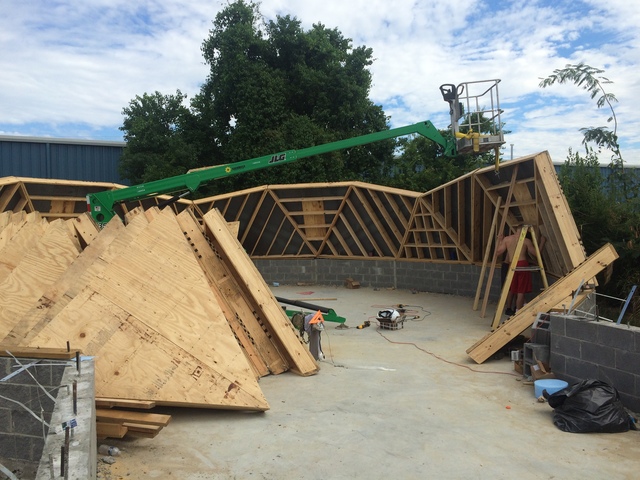 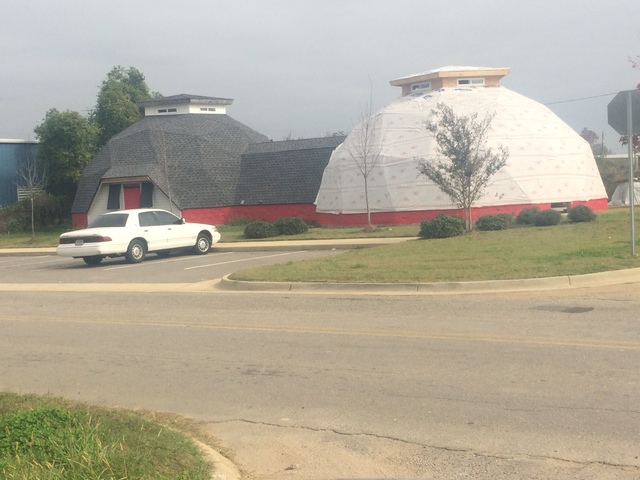 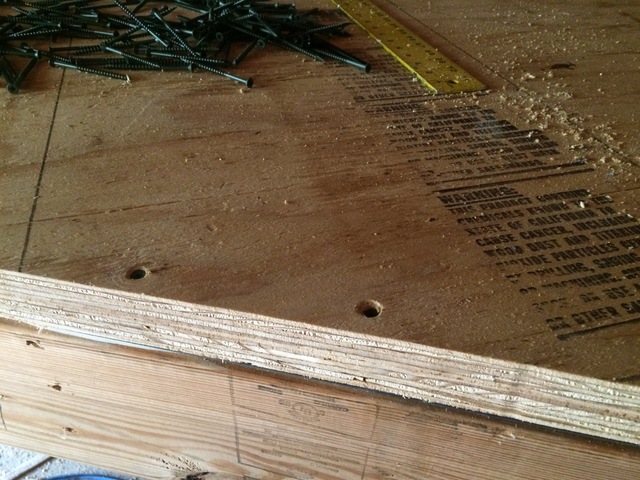 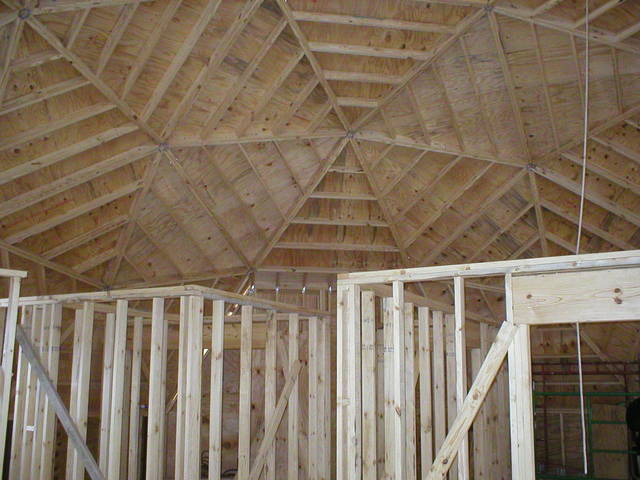 We've got a good bit of  height in dome 1 so I added a loft. Doubling the capacity in an emergency in just this one dome to over 800. 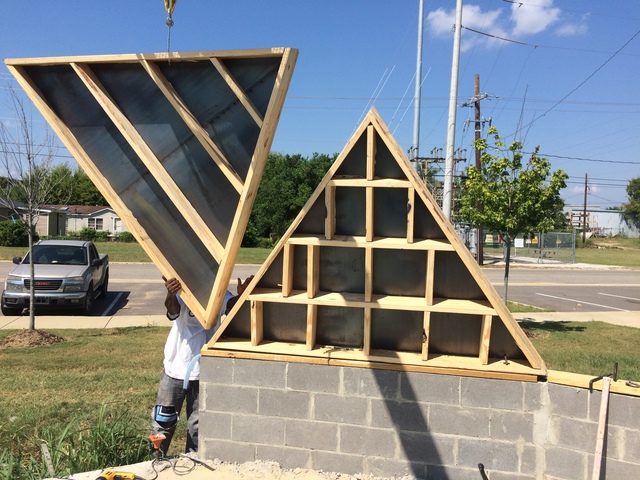 The first rows are lined with 14 gauge steel plate under the plywood.

Each panel has multiple hold downs.  Any ONE of which meets spec.

So why stop at one? Because it's the way we over-build that makes us who we are.

SO lets look at the raw data..

250 mph wind duty rating, with 225 lb per sq ft structural strength. This is noteworthy because an F5 tornado affects box structures at the rate of 400 lbs per sq ft. Our domes are more slippery so they're only affected at 100 lbs per sq ft.

We did a little ballistic testing of our own this month by subjecting our  metal reinforced shelter panels to impacts a little faster than your FEMA spec 2×4 flying at 100 mph.

We backed off 25 yards and started shooting them.

We started with low power .22, then mid power, then Yellow Jackets, then .22 magnum. No dents in the metal visible on back side after penetrating 1 1/2″ of plywood. Not really expecting anything. Heck the plywood alone will stop those.

Next up was 9 mm, ( the FEMA spec) Not even a significant dent in the metal plate.

Nobody had a .45 so we had to settle for what I was sure would do it…

Nope! Getting a little  more dent yet but no stress signs at all 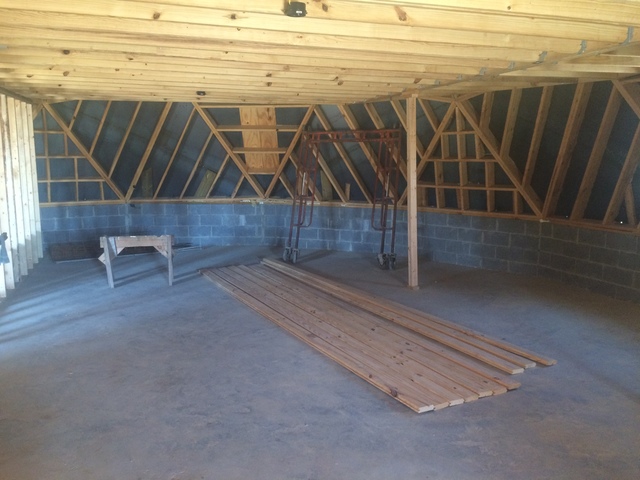 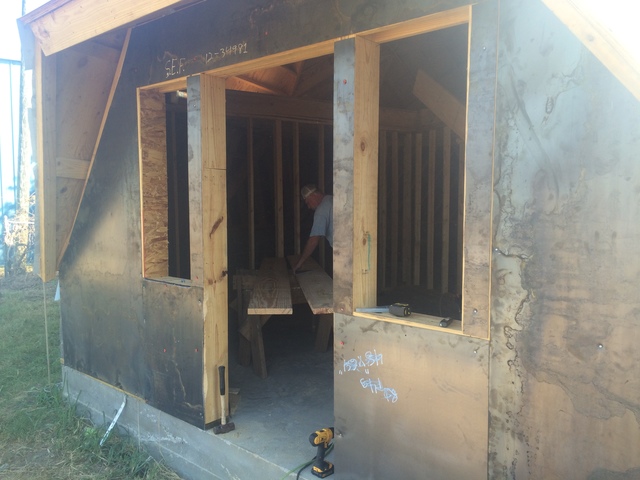 You can see how an impact load is transferred much the way a spider web absorbs energy. Anything pushing one way has a web of framing members pushing back. And of course we have to armor plate the flat walls around doors and windows. The windows are protected by 1/4" steel plate. The shutters tilt open and offer "bimini" shutter shade in direct sun areas.

And here we are…

The NEXT time somebody walks in my shop and asks me where I've built a FEMA compliant shelter before, I’ll tell them, “You’re standing in it”.  Dome 2 is finished and storm ready right now. We've had neighbors over during warning sirens more than once! 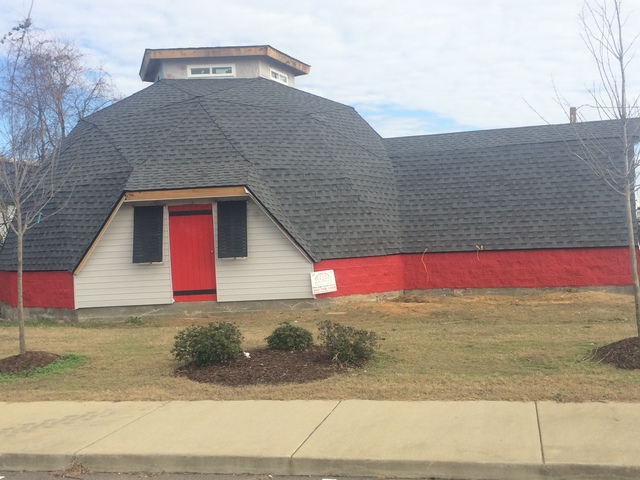 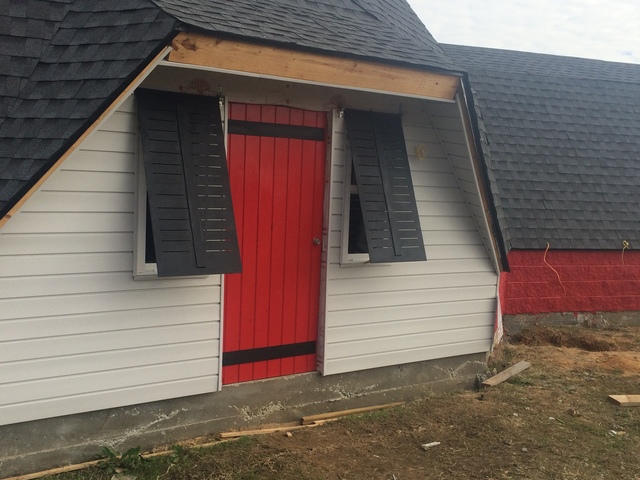 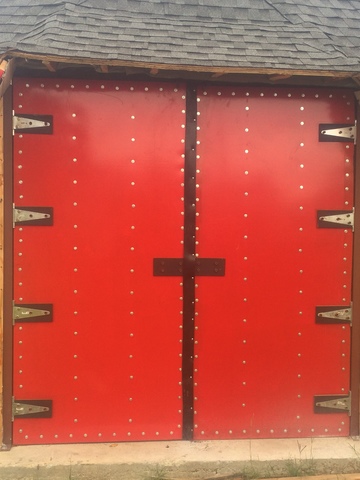 Some serious cargo doors here. Most certified FEMA doors are hollow with a foam or hollow core. These have the required steel plate over (2) layers of 3/4" plywood glued and screwed together BEFORE the 100 bolts sandwich them. Heavy. Solid. Beyond FEMA specs 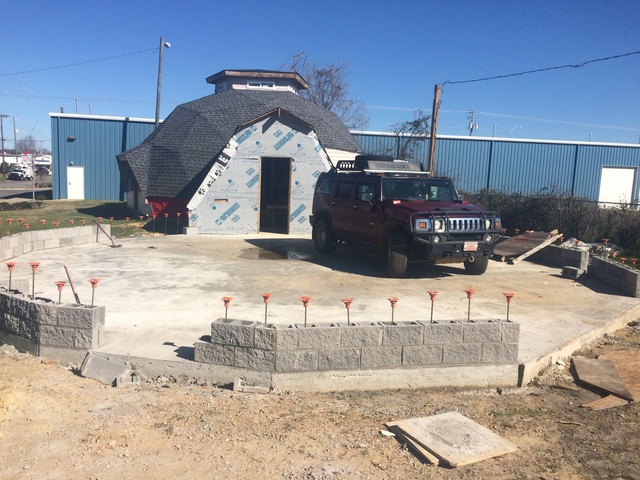 Finished materials dome going up. This one has no second floor and affords a protected space to store finished goods, create new domes by modeling them first, and sheltering about 350 people as needed. 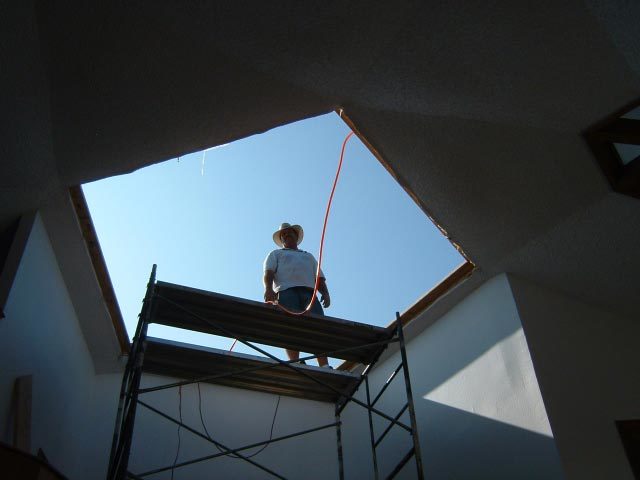 A study performed by Texas Tech and Colorado state university in 1998-2000 demonstrated why a dome has a better ability to deflect wind.

A rectilinear of “box” structure is impacted by an F5 tornado at the rate of 400 lbs per square foot. NOT expected to survive a tornado strike at all. So you can reason out why the common thought for storm protection in box form is immensely thick walls.  In short…Build a bunker. Ugly…and useful for one purpose. To HIDE in.

A DOME is impacted by an F5 tornado at the rate of only 100 lbs per sq ft. So if your dome is rated for more than that you can reasonably expect it to survive and at have SOME damage from debris to repair.  Our 40′ residential domes are rated at 250 MPH wind. SO WHAT if you replace a couple of windows like our client did after the F5! They still had a home. next door neighbor's house was just GONE!

Our basic domes are useful for community centers, or other practical purposes yet STILL possess the structural integrity to shield it’s occupants from danger. Why rush to a shelter when you are safe at home?

Lets be honest…the odds of being struck by a tornado are far less than the more common problems with storms…wind driven debris or trees toppling.Tress cause incredible damage to regular box homes while MY dome shrugged the tree strike off. 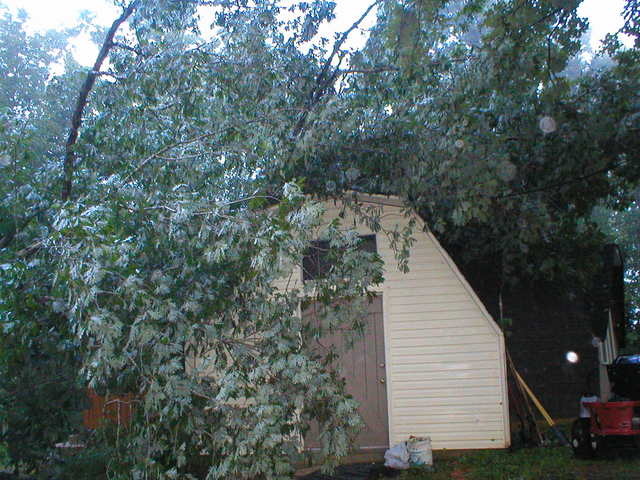 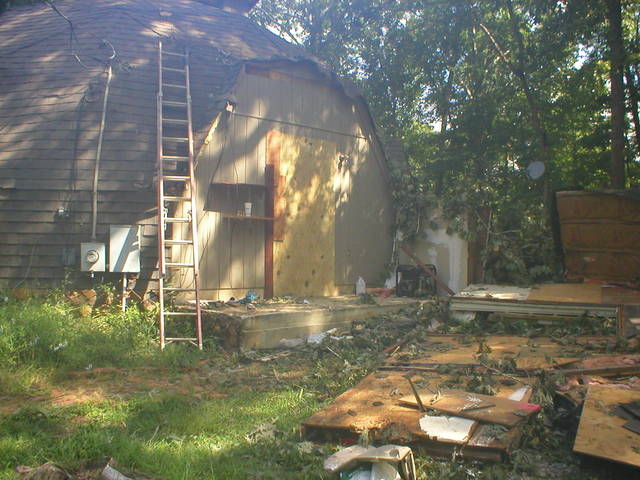 After tree removal. I decided to demolish the extension and start over with a longer garage . Do YOU see evidence of a giant tree on the house?Impact point was just to the right of the wire attachment. A regular box house would have been split in two! 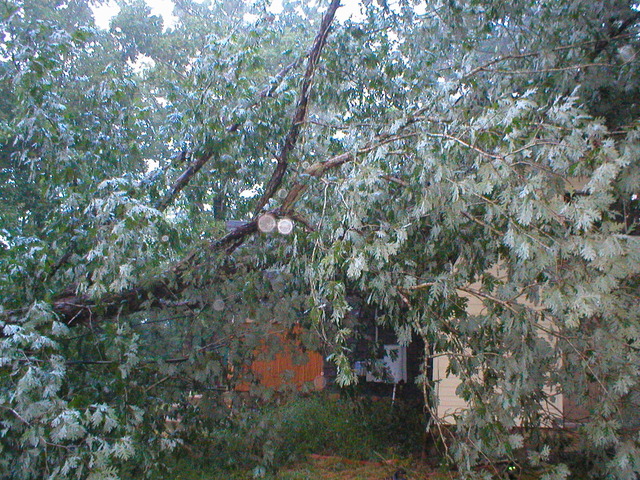 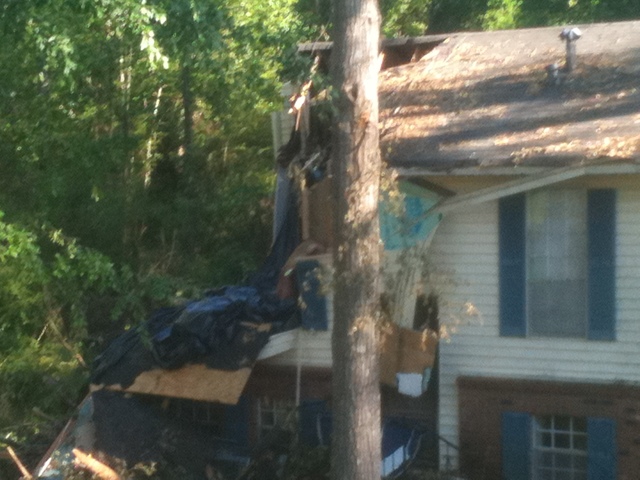 This "box home was cut in half by a tree 1/3 the size of the white oak that fell on mine at  left. Didn't even come through the drywall. We fixed a 3x3 hole a bunch of shingles and used the tree to heat the house that winter. 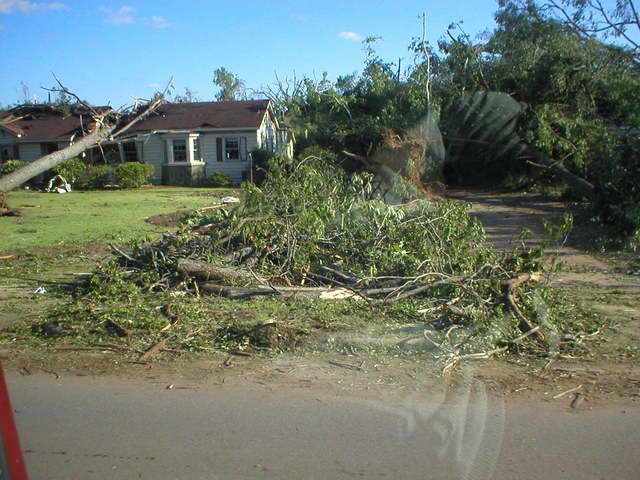 So what do WE do when a 120', 55" thick white oak snaps off at the roots and lands on our dome house? We make firewood. That tree heated the house most of the winter 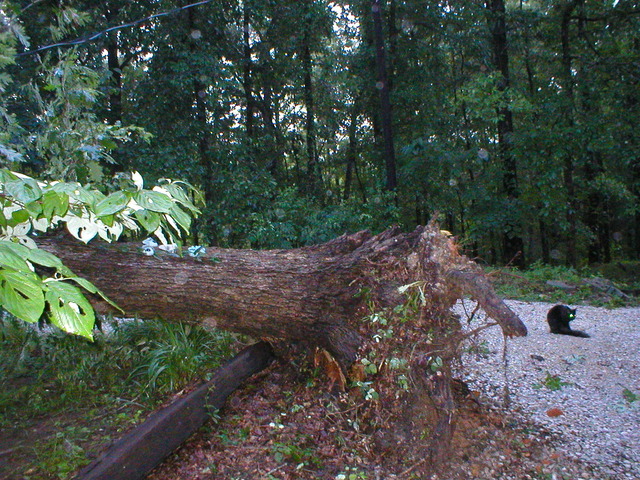 The tree hit on a perfect 45 degree angle and measured 55" thick at ground level about 24" up he root ball. BTW that's a BIG cat. My buddy Ewok. R.I.P.