If you live in ALABAMA that's not news. 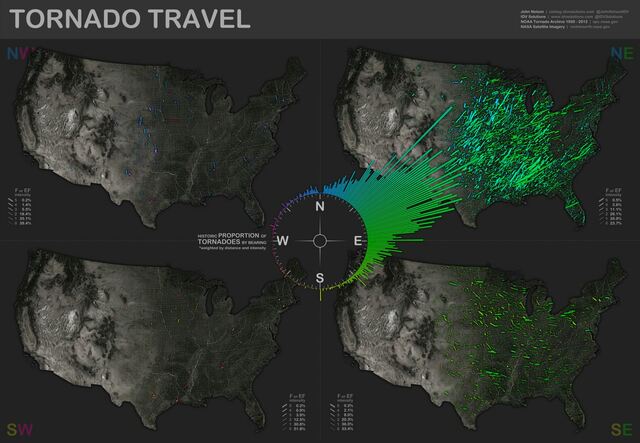 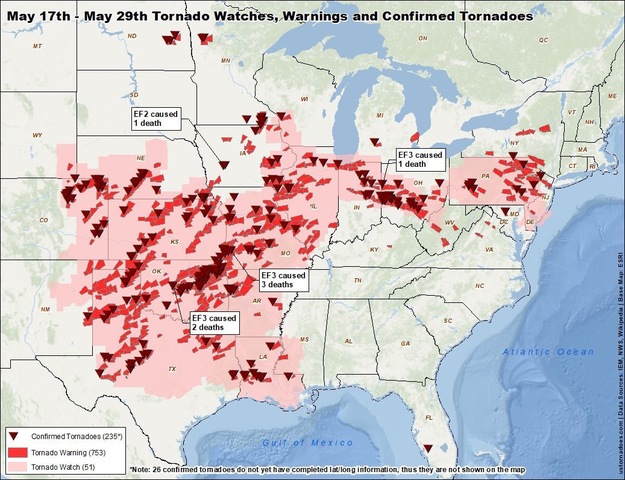 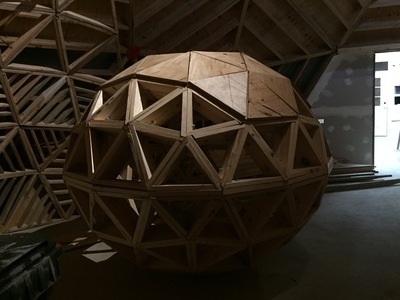 Due to it's resemblance to the Star Wars space station we're gonna call this the "Life Star". I kept hearing faintly,"Luke I am your Father" while building it for some strange reason. All kidding aside, this is for those folks who don't have a shelter and can't get to one, especially on short notice like in the middle of the night, this is your answer. 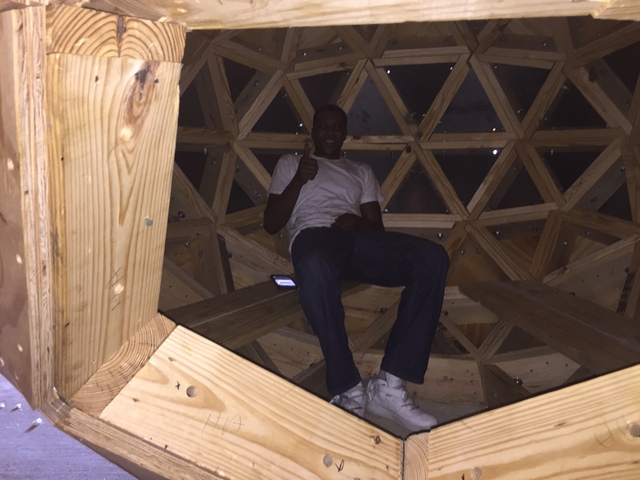 Jay is 6' 7" tall and not only is happy about the legroom but he's finished with the 4,000 + screws inside between the studs. 6-8 adults can fit inside comfortably because you're sitting in a circle. Tumbling mats for back rests. Unbreakable Lexan on top for light and vents for fresh air.Solid latches and spring loaded hinges. 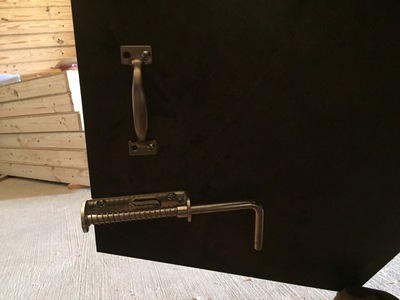 (Below) Our FEMA certified "survival pod" prototype under construction, is shown here upside down before steel base plate with legs are added. This model is an 8' sphere but is only 75" tall so it will fit in a corner of your garage secured through the slab, taking up as much room as a riding mower with bagger. Unlike the steel boxes seen in the bldg supply stores, these pods have 2 openings for exits and you won't have to be cut out of a metal structure if the door is deformed. This size holds 6-8 comfortably seated in a circle which allows more room than a steel box because of the round shape...natures strongest. 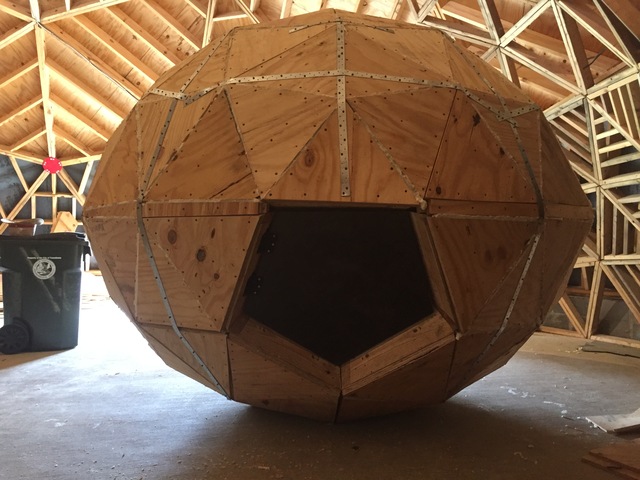 Right side up and you can see the anti squash straps which are overkill...but that's what we do when asking you to sit inside our pods. Shrink wrapped with 10 mil plastic so you wont get wet when the roof is gone from your garage, and 10 attachments to the slab. 5 on the inside and 5 legs on the outside yet to be installed means it's not going anywhere even after your garage roof is gone. . The door is 1/4" steel plate with a 1" throw bolt to hold it closed. I put the door low so you won't be trapped if debris leans against the pod. The door is spring loaded for easy swing outwards.Takes about the same space as a riding mower with bagger. Price is modest so anybody can afford one, and FEMA will refund most of your money when you do the forms. It fits nicely on a trailer or flat bed and slides right in the garage door. 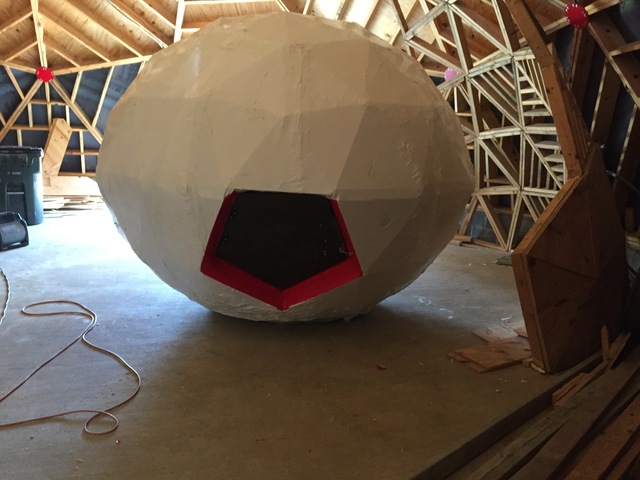 How many people have to die before someone builds a tornado safe home? 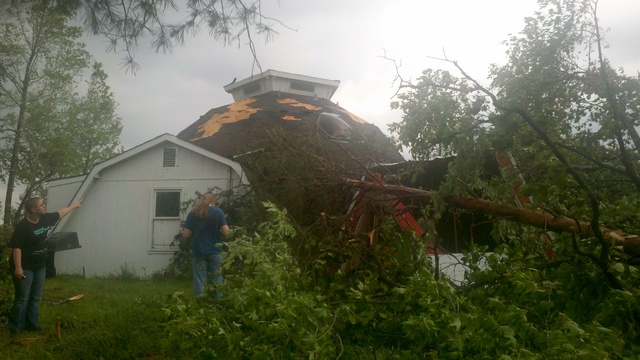 The technology is here and now!

The owner of this dome we built  told us "it's a pretty good deal when an F5 hits your house and all you lose is a single window and your dog pees on your foot."

This box house didn't fare as well in the same tornado 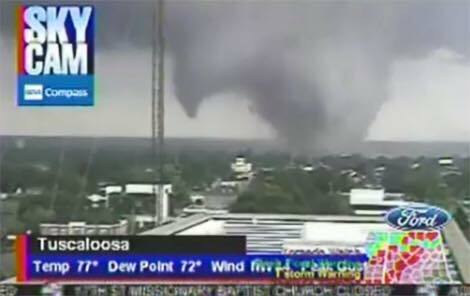 The very same tornado did THIS to the city's EMA headquarters(below). What you can't see is the intact round water tower in the background. 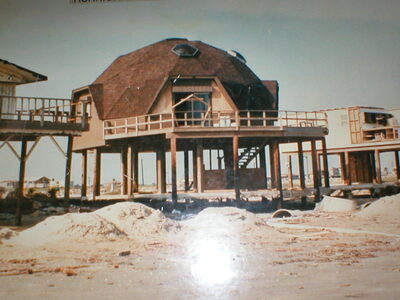 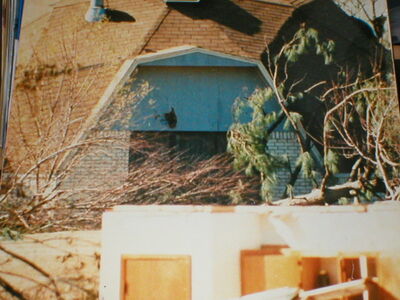 After Hurricane Alicia..... and an F4 blew OVER the dome to demolish the box house in the foreground 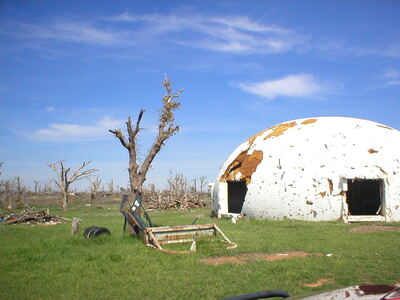 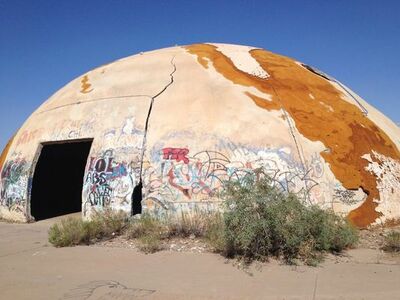 No honest concrete man will tell you his product won't crack, even with additives, so THIS is the inevitable conclusion of a concrete dome. The manufacturing, transportation and placement of concrete contributes to almost 30%of world's greenhouse gasses. And I really don't want a million pounds of concrete over my head! They have failed during and after construction as in the NUCOR dome in Baton Rouge that collapsed after finish. Seen below and on Facebook. Look up NUCOR dome collapse! Not a piece of rebar in sight!

Tuscaloosa's 3.7 million dollar boondoggle with an 8 year life expectancy roof membrane on it.

Its not even finished and has cracks running top to bottom already. 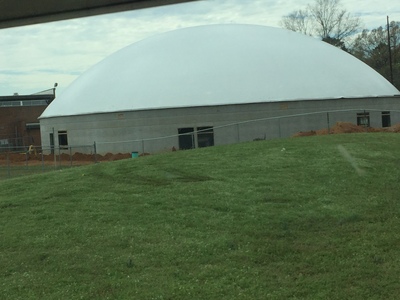 Naturally the question arises, how can a dome of concrete be flawedbecause there are so many being built? It's a knee jerk assumption that concrete is better. Just like the steel tubes that were the initial reaction to shelters. They are now rusting, molding and the State of Alabama is moving away from them. Now the cost of concrete has gone so high that many communities are sacrificing capacity in order to build a shelter using a method pulled right out of a college textbook.  ONE load path using a material that tends to...wants to crack. OUR shelters have over 5000 load paths. When one absorbs its maximum it transfers the load to the next ,and so on until the impact is nullified. Much like the arresting gear on an aircraft carrier that stops multi ton aircraft.

It's the SHAPE that makes the difference. Colorado State and Texas tech have done the definitive wind tunnel and projectile studies that prove that. The very reason FEMA approved a storm shelter based on 361G specifications. They say you can add a safe room in your home built to these specs and be safe.

Why not have a shelter that doubles as a community center?
One ( fired) architect said ours didn't look industrial enough! 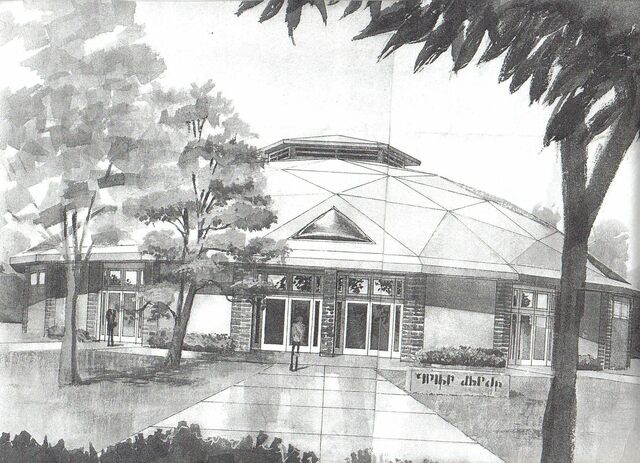 This is an artist rendition of our 11,630 sq ft community sized shelter.  That is a complete 6 frequency dome that sits behind a 10' tall 10" thick "rampart" wall with short overhangs, leaving a perfect machinery/ventilation duct work space between the walls and the 5 1/2 degree tilt of the dome. Built for significantly less than the concrete inflatable skin domes which fail before and after construction.

. T   The first Tuscaloosa shelter architect said ours didn't look industrial enough. That's the best he could do? Our chief architect not only studied under Buckminster Fuller, has extensive experience with domes, and would rather see the same grant of tax money used for more shelters and more coverage in the community. 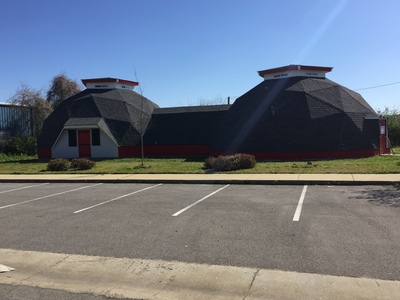 Inspected by the ICC yearly.

Not so the concrete spray nozzle guys on the blow up domes.

Final assembly of the panels that make up the energy absorbing nature of the building. Our REGULAR 2x6 dome houses are rated for 250 mph, but this factory/shelter using 2x8 and (2) layers of 3/4" plywood over 14 gauge metal is the 361G spec taken to the next level. 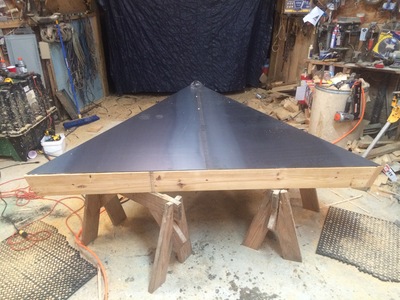 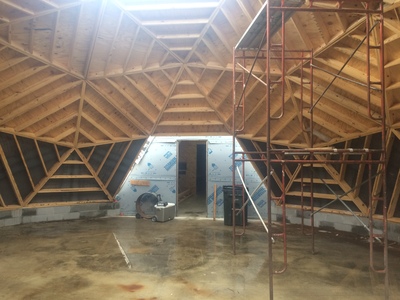 This structure is rated to 400+ mph winds. 2x8 framing with 14 gauge steel liner and (2) layers of 3/4"  plywood per FEMA specs make this  SO overbuilt since it's built to the specs for square buildings. DOMES are 3-4 times more slippery to wind as verified by Colorado state and Texas Tech wind tunnel tests back in 2000.NEW AGE shelter domes are 50% less expensive and 400% OVER the missile penetration specs required by FEMA! 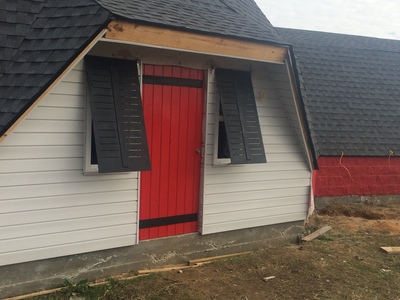 Heavy 1/4" steel shutters protect the glass yet cant outwards for light like Bimini shutters. This makes your shelter useful for things other than a place to hide.Your small community's new fire station or city hall can be paid for with USDA grants in place right now!4 small towns have applied in July!

2 years after starting we're done! NO public money, No bankers, just a lot of sweat and determination and proud to do it. At least I'LL have a place to go back to after our next tornado. And if you live in Tuscaloosa...there WILL be another. 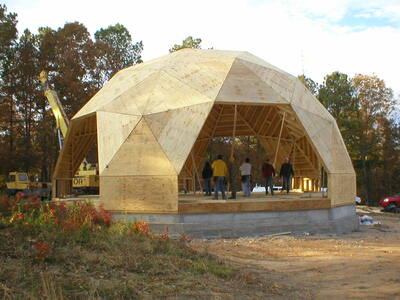 The comments here are," Damn ...this is bigger than I thought!" 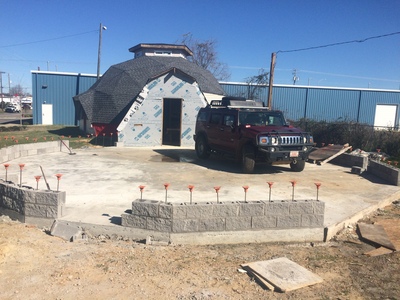 Notice the extra rebar in the filled concrete cells? 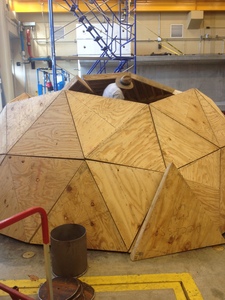 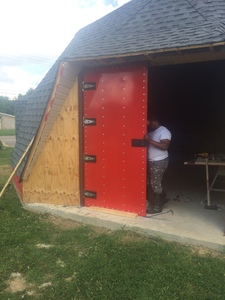 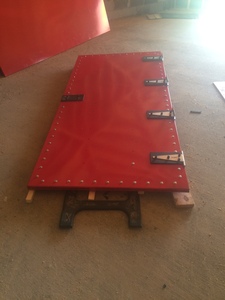 I'm afraid the sawhorses weren't up to the task of building these 350# cargo doors. Most shelters will NOT have cargo doors, but we had to have them, for completed panel load out, so we had the specs on FEMA "store bought" doors and beefed them up. Whereas a "store bought " door has 2 layers of metal sandwiching a foam or hollow core, THESE are the same metal thickness on top of 10 layers of laminated wood with a plywood core, 1 1/2" thick! 100 bolts to make them even more rigid. 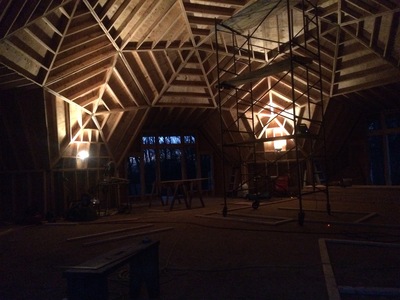 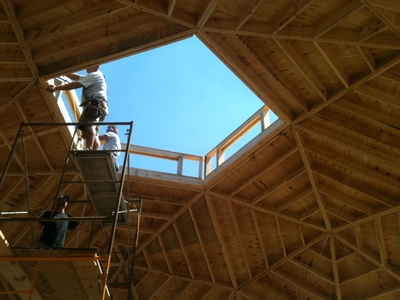 Maybe you'd like to see (below) what's BEHIND the siding and 2 layers of plywood that you'll otherwise never see. These door opening section stopped a projectile in testing that was 400% OVER what FEMA requires in their 361G specification!

So lets say your shelter is impacted by a tornado. Here in the south that's not a stretch of the imagination. In a concrete "blow up" dome the vinyl liner is going to be mutilated at best. Then all the foam before you get to the concrete inner layer is gouged and  misshapen.  Lets say you have a steel beam impact the dome and crack the concrete. You've then have compromised the strength of the entire structure with ONE load path and it has to be torn down and replaced. So what? Maybe they have insurance. Then you are unprotected during expensive tear down and rebuilding process. Maybe mother nature will cut you some slack during the repairs.

In OUR shelter the panels can be removed and replaced without affecting the strength of the structure. Replace several triangles and the dome is still standing strong as it was built WHILE the repairs are going on. Then renew your roof shingles and good as new. All in a matter of DAYS! 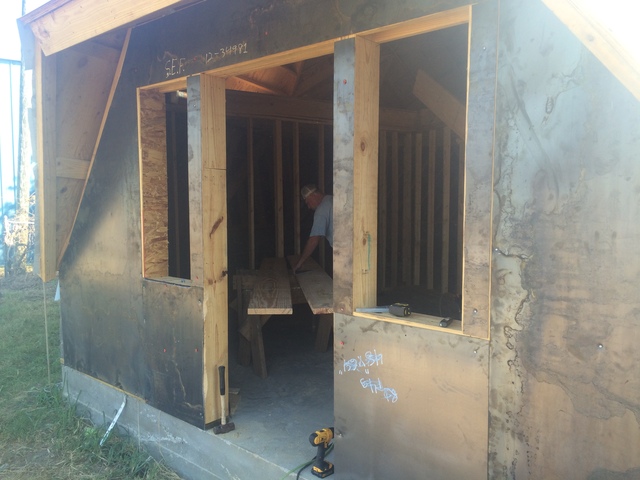 Look at all the load paths. The slope of the dome precludes steel all the way up. Air is shoved around a dome much like the leading edge of an airplane wing or the bulbous bow of a ship.It creates a zone of super excited air to deflect direct hits. 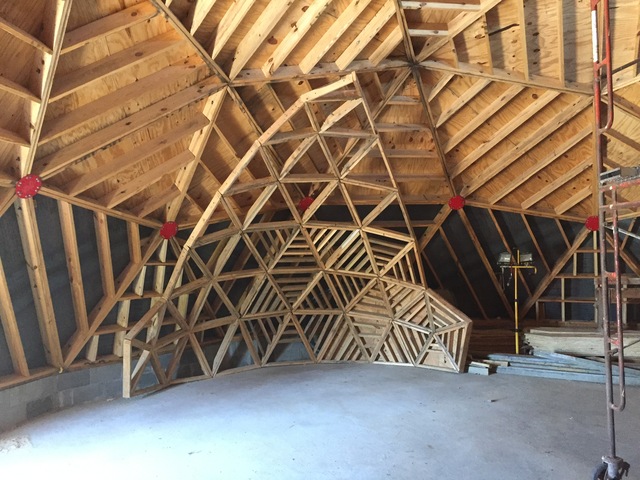