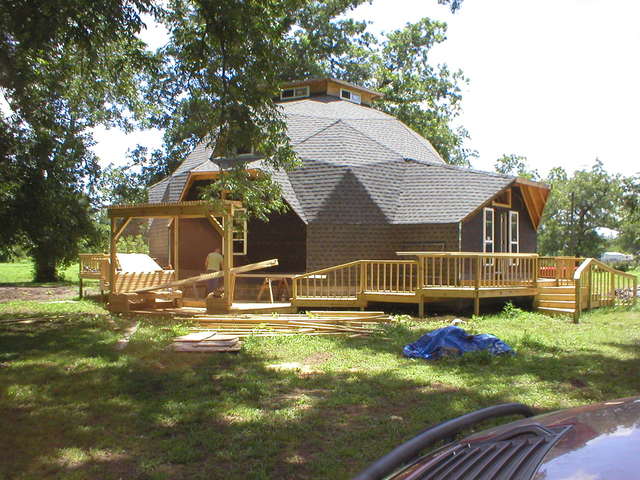 Flood water last year made it just to the top band of deck. I KNEW I'd better go a bit higher than the engineer said I should and am glad I did. So of course, were the owners.

Tammy T's central dome. One of three. She has one piece of furniture in the middle one. Steinway baby grand. This gal can tickle some ivory. 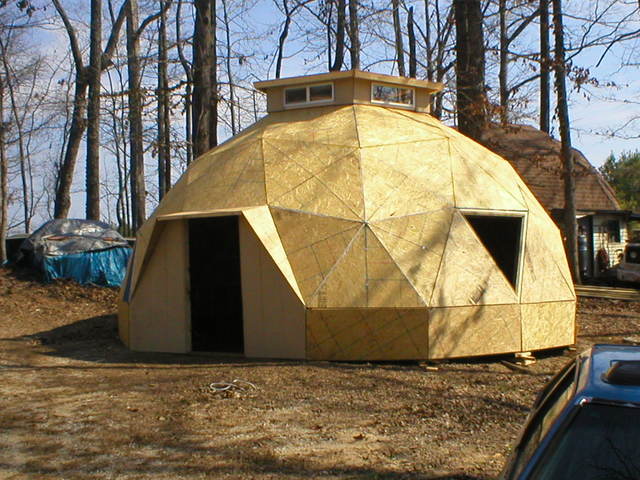 We know tiny houses too! Normally don't use osb but this was a prototype. 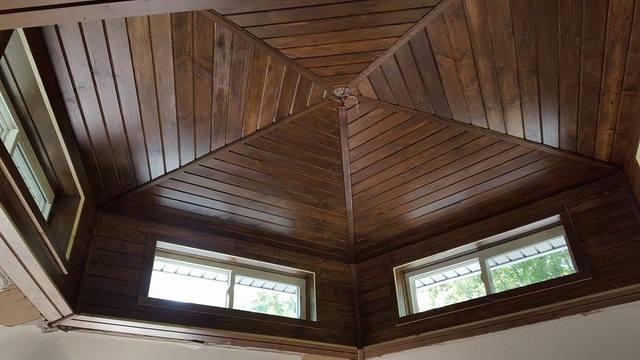 Neat interior finish for a cupola in Ohio 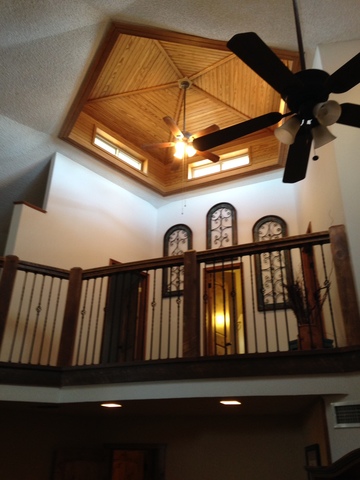 Another nice cupola and finish for Dave and Cathy in Texas 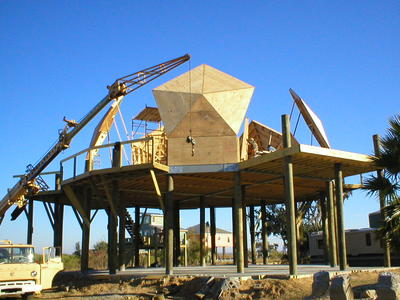 This Texas beauty has a definite southwestern decor 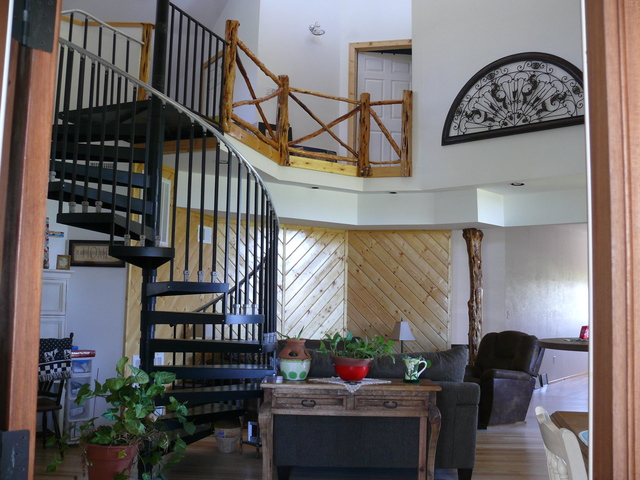 Joe and Dixie captured southwest flair in this design!

This SW Texas beauty  below was a first for a credit union to finance. Bank president wrote us a nice letter upon completion.

Dome on right is AFTER Katrina couldn't knock his old dome over, though it DID inundate it 12'. This ones 16'6" above the flood line and you can see the elevator on the front.

Wrap around decks are my favorite things 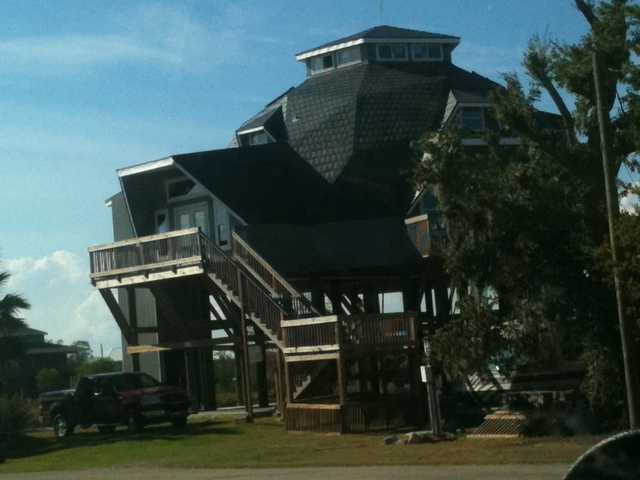 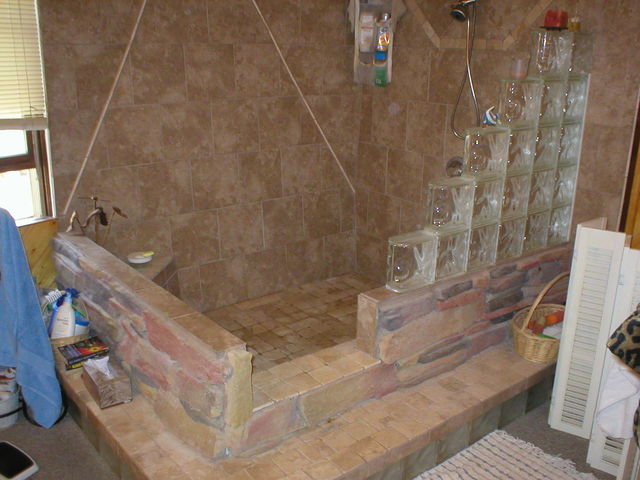 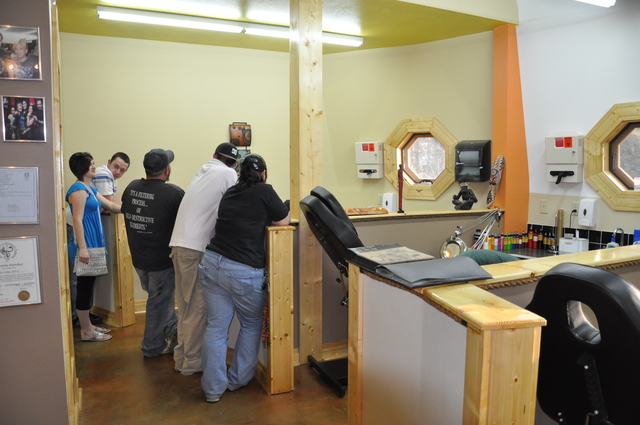 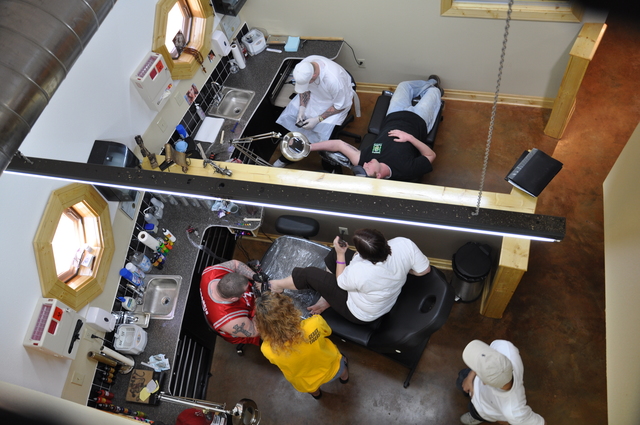 The RSA tower in Mobile Alabama. 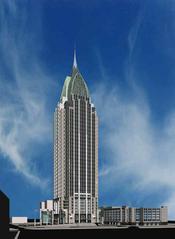 The RSA Tower in Mobile. We had the responsibility of providing the copper for the "wings", making it green, and providing supervision of the installation at 42 stories up.I would face the core during on- site meetings. Simply could NOT lookout over the bay. Smart alecks took me up the first day in the outside elevator KNOWING I was scared of heights, then later admitted there was an inside elevator. 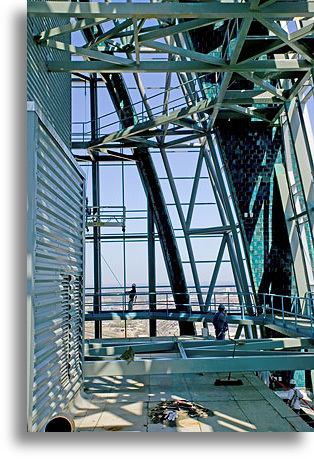 Sure looks different without  the scaffolding in place! 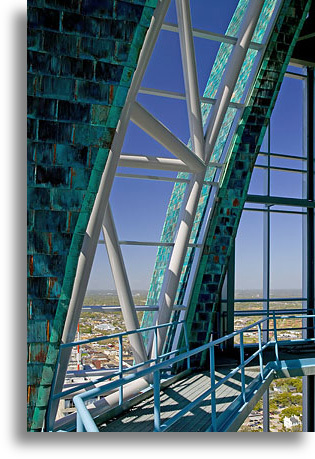 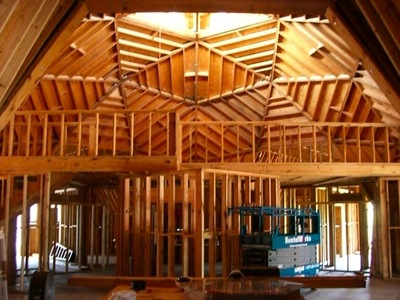 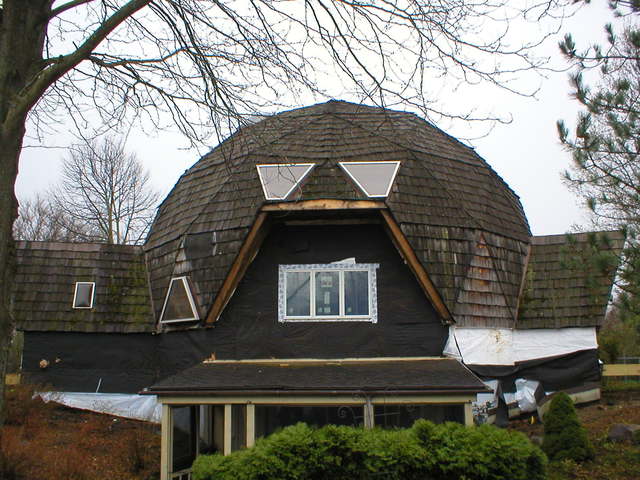 SOME WORDS FROM OUR CLIENTS AND DOME IN LAWS

I’m writing this to anybody needing dome repair, remodeling or thinking of building a dome. John and the guys at New Age Construction, are the ONLY people to trust with your dome project.
They’re expert, competent, and fair.
Trying to keep this saga short….We had a dome built in 1982 by Domes America. That’s right…the last big recession complete with 21% construction loans and 16% mortgage. We chose a dome because it was quick to build, efficient, and a lot of room for the money. A very open design with 3 bedrooms, a loft and full preserved wood basement. A wonderful space that was perfect for a young professional starting his career. My wife and kids loved the open feeling while the wood stove in the center kept the house very comfortable during even -20 degree weather.
As with any home natural wear and tear dictated it was time last year for a remodel. I found John on the internet and after one call knew he was the man to oversee this entire project. From the newly added cupola, fire egress dormers, and roof and all things related to the dome itself he was the man in charge. After a few false starts we were able to find a local contractor to work with John on the project. I acted as general contractor to facilitate cooperation among the chosen trades while we moved to an apartment. Air-room, a local company in Chicago was chosen to assist in what was to become quite a major project. We moved out in February and back in December.
New doors, windows, floors siding, drywall refinished, upgraded appliances, and a new larger garage and gazebo rounded out the project (pun intended).
Key to the success of the entire project was John’s expertise and guidance. There were a lot of windows that had to be brought up to code as well as the cupola and new roof. His son Dan followed up with a roofing crew that is top notch. Just days after the roof was installed we had an episode of 80+ MPH winds. No blow offs or leaks. Since then we’ve had a similar event, again with no problems. I’m glad we got rid of those cedar shakes. The new look is modern as well as being the best looking roof the house ever had.
My wife was initially hesitant at the sheer size of the project but not a day goes by that she doesn’t comment on how much she loves our new dome.
I’m just a “domebell” through and through, and love it when big storms come in off Lake Michigan while I sit in my dome secure and safe in the knowledge that I had the best in the business at my disposal for this project. Do not hesitate to use John and his crew for your dome repair of build. They are good people trustworthy and expert at their craft. 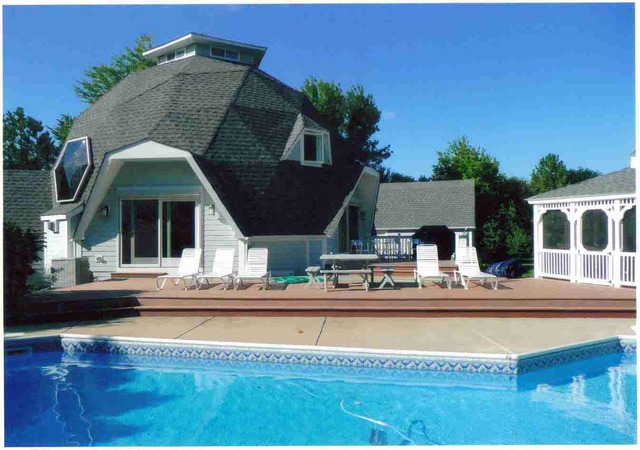 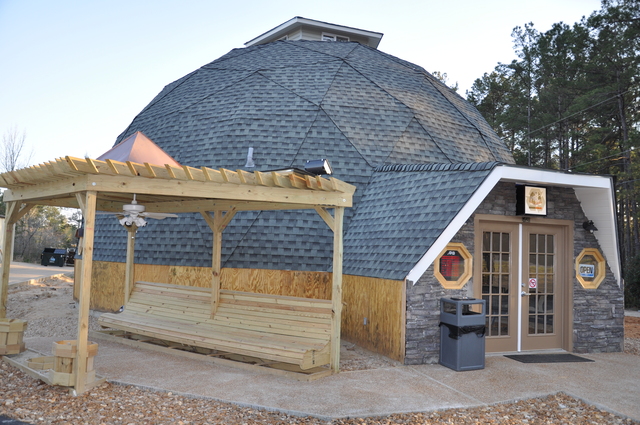 It has been three years since our dome journey began.  We had the pleasure of working with John Johnson of New Age Construction and John made that journey end in the most positive way imaginable.  We are now the very proud owners of the World’s First Tattoo Dome.  We are going to be in the 2010 Guinness Book of World Records and without John, that would not have been possible.
Never underestimate the power of expertise, especially in a specialty field such as dome construction.  John’s knowledge and insight were crucial into our being able to complete this job.  For instance, early on in the project, we thought we would save money by using elastomeric roofing.  We had talked to several people and made our decision known to John.  He showed us that we do not live in the correct climate for that type of roofing.  It would not “breathe” in our humidity, and that over time, we would have had a rotting building.  That was a close call because we were all set to do it the wrong way!
From the very first step to the very last step, John was a very good resource and knew his way around everything concerning construction and costs.  He would let contractors know he would not allow us to be overcharged for any services.  He worked on the site every day and I do mean he worked!  It is very hard to find someone who will patiently guide you through every problem and keep everything going in order to finish a project like this on time and on budget.
We are very pleased with our building and everyone who enters it admires it.  John used his imagination to create some very nice design effects and the floor plan he put together works perfectly for our artists and clients.  We couldn’t be more happy with the outcome.  We were led so many wrong directions by people who did not know a thing about domes.  We were finally led to John and he got our project off the ground and running.
I cannot thank John enough for all of his hard work and dedication.  He was a godsend to this stalled project because nobody in our area had a clue as to what we were trying to do.  John had a vision and he made it happen.
Thank You,
Lori and Mel Collier Natural Mystic. 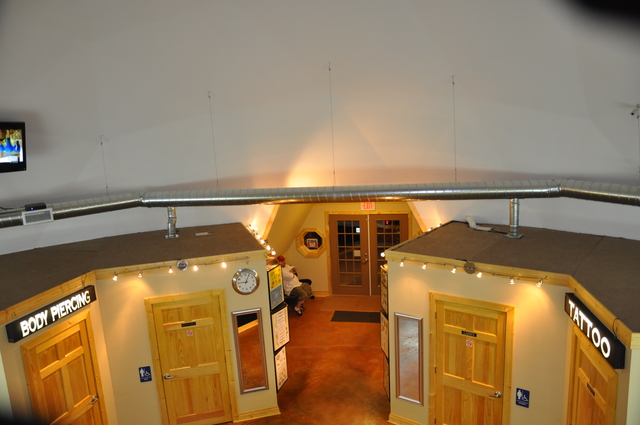 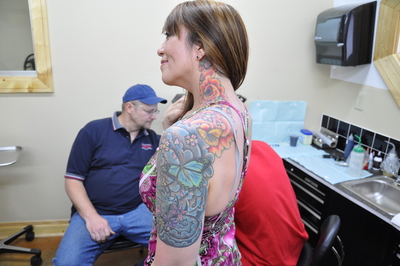 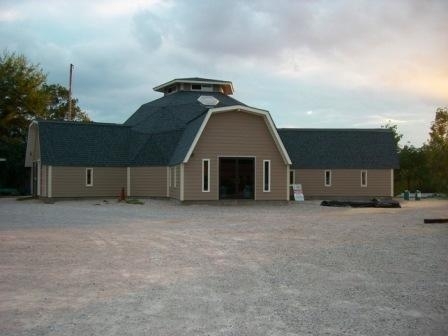 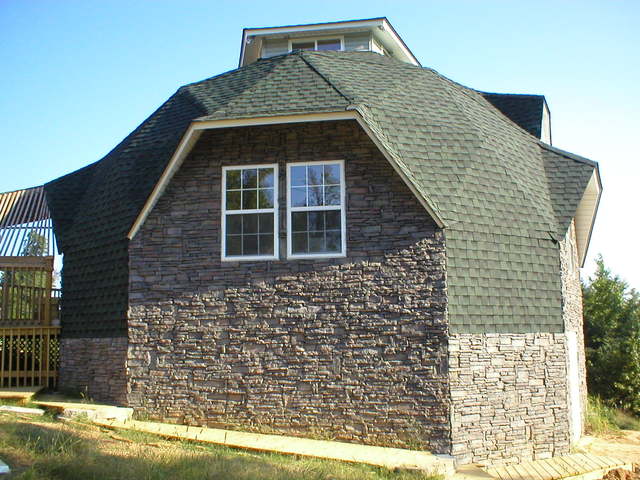 I enjoy this type of stone finish. Jerry's office had so many visitors during construction we had to put up a sign so we could work.